Charleston at sunset, out our hotel window.

Charleston, South Carolina.  This was my first trip ever to the “real South”… I guess I don’t count Florida as the “real South” – not sure why.  At any rate, with the help of our Magellan GPS system – and the woman inside who tells us where to turn and which lane to get into – we arrived without a hitch in Charleston after a several hour drive from Florida.  You know, I used to be my dear husband’s “right hand woman” — his number ONE navigator – the “super duper map reader” — until this GPS came along.  We nicknamed the female voice “Maggie”.  At first I was a bit resentful of Maggie.  After all, I was always the one calling out the twists and turns to our travels.  All that changed this trip, and people, while I was a bit reluctant at first, I grew to LOVE that woman!!!  I didn’t trust her in the beginning and had my map out and open… following along with her instructions.  But then… as I noticed that she suggested all the same exits that I would have, I gave up.  I gave in to “Maggie Magellan”.  It was soooo sweet to NOT have to flop around with that map!!  Just plug that girl in, type in the address, and wait for HER to tell us just how to get there.  I’ll never go without “her” again!!

In Charleston, we had a limited amount of time.  I wanted to go to two plantations.  We made it to one.  John wanted to get out to Fort Sumpter, and we did manage that.  I had lists of “good restaurants” I’d gleaned off one of my favorite webistes, tripadvisor.  Tops on my list was a carriage ride through the historic district.  We went with Palmetto Carriage.  The carriage driver/tour guide was superb – we learned so much about the history of the city! 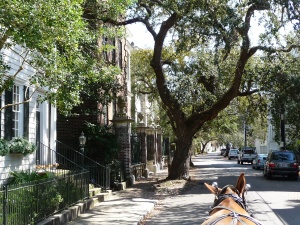 On the carriage ride through the historic district of Charleston

We took a ferry out to Fort Sumpter, and learned more about the Fort and it’s part in the history of the US Civil War.  I just love history and historical sites and thankfully so does John.   Then, it was on to Boone Hall – a plantation just outside of Charleston.  WHAT A GREAT place to visit!  All right, I’ll admit that one of my favorite movies of all time was/is Gone With the Wind.  I became fascinated with “plantations” when I first saw that movie back in the 70’s… and the trip to Boone Hall was like a dream come true.  It is still a working plantation, although they no longer grow cotton or Pecans as they once did.  Check out the view going up the “Avenue of Oaks”!

Imagine being on a horse, riding up this driveway!

These Live Oak trees were planted in the 1700’s by the original owner, Mr Boone.  “Live” oak trees are evergreen, unlike your run of the mill, basic Oak, like we have here in Washington!   We attended a presentation on the Gullah culture, set up behind one of the slave cabins on the plantation.  Since the slaves came from all parts of eastern Africa, they all spoke different dialects and the “Gullah” language was born… a blending of all the dialects – so they could communicate.  It was a fascinating presentation.

She told us a story in Gullah, and then translated it to English.

The third home built on the same site.

We took a guided tour around the plantation and then a brief tour inside the lower level of the home – which is actually the third home to be built on the same site.  I believe the other two burned down.   All I can say is that this was a wonderful piece of living history and I wish I’d had more time to go to more plantations!   After our visit to Boone Hall, we began our trek southward again, to Savannah Georgia…  a place that would prove to be not only interesting and again historical, but a little spooky, too!

Ordinary life.  Nothing wrong with that. But also nothing too pressing in my mind that I’ve wanted to blog about lately.  Guess it’s the blah’s or the mid-winter blues, or writer’s block.  So, instead of an interesting quip or topic about today’s political atmoshpere, I’ll just update everyone on what’s new around here.    Not much.  No, really.  Let’s see…..

So, there you have it.  That’s what’s new in the ordinary life of this ordinary baby boomer gal.  You know what?  It may not be too thrilling, but I am so content.  I am so blessed.